We are aiming to raise £10k to help 4 small local charities in Brixton. Visit our Just Giving page.

It’s not news that diversity and representation is lacking across many industries and areas. While there have been efforts to improve this over the years, we still have a long way to go – and the first step towards getting better is recognising this.

October is Black History Month. In honour of this important initiative, we wanted to raise awareness about the lack of black representation, particularly when it comes to prestigious awards wins for the Oscars, the Golden Globe Awards and the Nobel Prize.

This year’s theme for Black History Month is Time for Change: Action Not Words. We wanted to put a spotlight on the lack of diversity throughout various industries, encourage society to embrace the spirit of inclusivity and recognise the often overlooked accomplishments of black people. We know that we can all do more and we firmly believe that every effort helps, no matter how small!

With all that in mind, we’ve crunched the numbers and collated a report that illustrates the shockingly low number of awards won by black people across various categories as opposed to their non-black counterparts. Spoiler alert: it’s not equal representation.

How Many Black People Have Won an Oscar?

Our research revealed that only 74 black people have ever won an Oscar, an award ceremony that has been hosted since 1929 – despite the fact 3,140 statuettes to date have been awarded.

The shocking data also revealed that no black person has ever won an Oscar in categories like Best Cinematography, Best Director, Best Film Editing and Best International Feature Film. And when it comes to gender representation, only one black woman won an Oscar for Best Actress in Leading Role over the years – yet five black males won Best Actor in a Leading Role.

How Many Black People Have Won a Golden Globe? 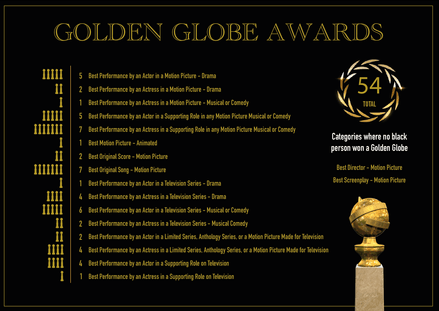 When it comes to Golden Globe Awards, only 54 black people won an award since they were established in 1944. According to the study, only two black women have ever won the prestigious award for ‘Best Performance by an Actress in a Motion Picture – Drama’ and only five black men have won for ‘Best Performance by an Actor in a Motion Picture – Drama’.

How Many Black People Have Won the Nobel Prize? 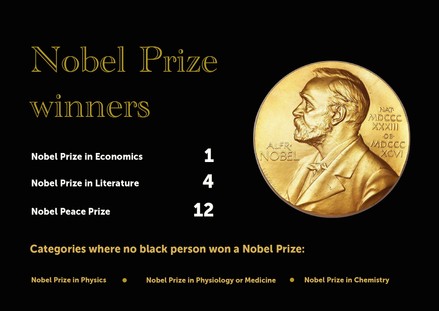 The Nobel Prize has been awarded to 954 laureates between 1901 and 2022, of whom only 17 black people ever received this award – 1 Nobel Prize in Economics, 4 Nobel Prizes in Literature and 12 Nobel Peace Prizes. No black person has ever won a Nobel Prize in Physics, Medicine or Chemistry categories.

There is an increasing acknowledgement that diversity and inequality issues exist but there is still a long way to go until the balance is achieved. More companies and organisations should consider having diversity and inclusion at the forefront of their agendas. Everything starts with awareness and helping to make sure the black voices are heard and their achievements are recognised.

How Passion is Embracing Diversity in Digital Marketing

At Passion, we believe in diversity in the workplace, and that people from all different backgrounds, regardless of their race, ethnicity, gender, sexuality or religion, should be given equal opportunity to succeed in a workplace. We pride ourselves on having employees of different cultural backgrounds, allowing us ample learning opportunities about different countries, histories and more. We believe that Passion is a safe space to encourage these conversations.

We are proud that our company is celebrating Black History Month this year, and we will continue this dialogue all year long – not just throughout October.

To celebrate Black History Month we have come up with an itinerary for the month, including sharing learning and reading material, enjoying African and Caribbean food supplied by one of our partner Charities, Platform Cafe, and inviting guest speakers into Passion HQ to talk about their experience as black women, and share some advice on how companies can become more inclusive. And it doesn’t end there, we’re hosting a movie night with popcorn and watching a film to end BHM celebrations.

“For myself personally, Black History Month has different connotations. On one hand, we get to remember and celebrate prominent black figures who have made significant changes in society, such as Martin Luther King and Rosa Parks and on the other, it is a month of reflection and acknowledging the imbalances in society that have persisted throughout history and still persist today.

I feel proud that Passion is celebrating BHM and that we get to take part in series of events to embrace African and Caribbean culture, but also, we believe that it is important to have conversations around topics that may seem ‘difficult’ or ‘uncomfortable’, but in reality are important for our knowledge and understanding, such as slavery and oppression of black people.”

If you are interested in working for a company that cares about diversity and inclusion, keep an eye on our recruitment page for career opportunities.